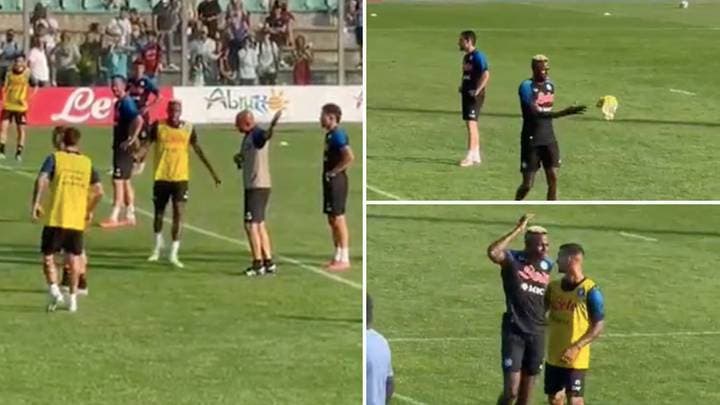 Osimhen was visibly angry after he was fouled by the Club’s New Player, Leo Ostigard during training.

After the fowl, the coach who served as the referee wasn’t sympathetic towards Osimhen and ruled against him, which made the Nigerian start ranting and bad-mouthing towards the coach and his teammates.

Luciano Spalletti who has had enough of his bad-mouthing decided to send Osimhen out of the training ground as Osimhen had to be calmed by teammate, Zambo Anguissa.

Spalletti then stopped training for a moment and ordered Osimhen out while stating that “You are taking too much, go and have a shower”.

Osimhen did as instructed but while walking down the tunnel, the player continued to voice his frustration.

Victor Osimhen gets kicked out of Napoli training early for excessive complaining after being on the receiving end of a bad tackle from new signing, Leo Ostigard. pic.twitter.com/hJnwbvAUvh