Governor Adegboyega Oyetola of Osun State on Friday asked the Election Petition Tribunal in Osogbo to nullify the election of the governorship candidate of the Peoples Democratic Party, Ademola Adeleke.

According to the governor, the election was fraught with certain irregularities. 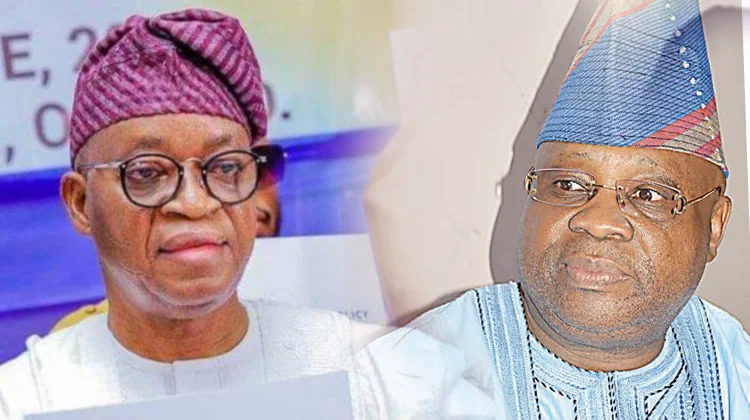 He also said that Adeleke ought not to have been declared winner as he was not qualified to have contested the election in the first place, having submitted forged certificate to the Independent National Electoral Commision.

Saturday PUNCH reported that Adeleke was returned elected by the INEC, after defeating his closest challenger, Oyetola, and 13 other candidates, scoring a total of 403, 371

Oyetola got 375, 027 votes and won in 13 Local Government Areas of the state to come second in the election.

A member of Oyetolaâs legal team, Kunle Adegoke (SAN), in an interview with Saturday PUNCH immediately after filing the petition in Osogbo said the governor has assembled 50 lawyers including 10 Senior Advocates of Nigeria, listing 13 grounds on which premises Adeleke should be disqualified.

Adegoke said the election in many 749 polling units were fraught with irregularities.

The legal team, he said, have established by the petition that the election in those 749 polling units across 10 Local Governments in Osun State was characterized by irregularities pertaining to over voting.

Adegoke said, âWe have nothing less than 50 lawyers, including 10 SANs that we cannot list all of them, so we have listed about 20 lawyers in the petition. We have 13 reliefs. What we are contesting is that the election is fraught with certain irregularities by which the person declared winner ought not to have been declared and the petitioner, Alhaji Isiaka Gboyega Oyetola ought to have been declared the winner on the ground that Nurudeen Ademola Adeleke was not qualified to have contested the election in the first place, having submitted forged certificate to INEC.

âSo, if the election in those units is nullified and the votes are cancelled, then Alhaji Isiaka Gboyega Oyetola will have comfortable requirements of the constitution to be declared winner of the election.â

Asked when the trobinal would commence sitting, Adegoke said he does not know.

âWe donât know yet but now that we have filed, it is expected that once the PDP is served, their lawyers will file their own defence then we will file a reply to their defence. That is when the tribunal will be able to give a date.

âExcept if either of the two parties have an application that requires urgency, only then can the Tribunal have an emergency sitting but as of now nobody knows the dateâ, he said.

Adegoke had on July 19 told The PUNCH that Oyetola may line up over 50 lawyers to contest the declaration of Adeleke as winner.

He had said, âWe are still reviewing documents and the legal team is actually working. In an election of this nature, the documents will be so many; so it is important to look at them critically before we take a decision and that is exactly what we are working on right now.

âDr Biodun Layonu (SAN), is the leader of the team. The legal team is not complete yet because there are so many others that will still come in.

âIn the meantime, the two members of the legal team we can reveal is Dr Biodun Layonu and Kunle Adegoke. Others that may come in are people, we may not know but as soon as we are ready to move, we will notify the press.

When contacted for reaction, the Chairman, Media Management Team of Osun PDP, Prince Diran Odeyemi, said the party was not losing sleep over the petition.

According to him, many of APC leaders that were saying that the result of the election should be challenged before the tribunal, lost election in their wards, saying APC should have adopted the spirit of sportsmanship regarding the result of the poll.

âIt is so unfortunately that APC did not believe in the spirit of sportsmanship. We would have expected them to congratulate Adeleke. Many of them, who are championing the cause of tribunal lost in their polling units and their wards.

âWe wonder what they want to take to the Tribunal now. We are not afraid or losing sleep, Oyetola canât win. We will meet them at the tribunal. Regarding the allegation of forged certificate, there is nothing like that. They are only looking for an avenue to come back to government through the backdoor. PDP is thorough political party that look at all the certificates presented by the candidates,â Odeyemi concluded.