The presidential candidate of the Peoples Democratic Party (PDP), Atiku Abubakar, says his administration will address the nationâs security challenges by taking tough decisions if elected in the coming general elections. 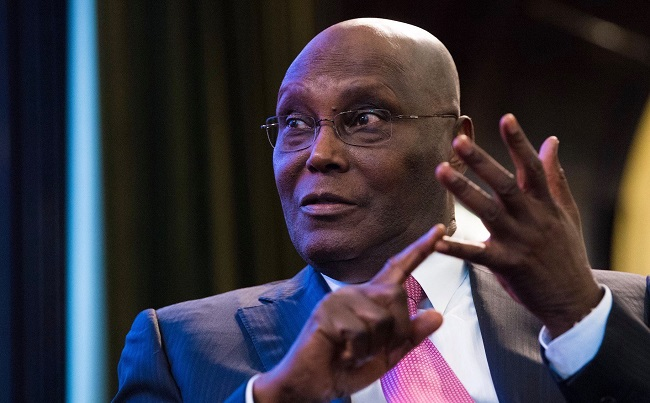 With about six months to the polls, the PDP candidate promised to prioritise the revival of the âcrawlingâ economy, especially through private sector participation.

He made the remarks on Tuesday at the Private Sector Economic Forum organised by the Lagos Chamber of Commerce and Industry (LCCI) in Lagos.

âWe will take tough and difficult decisions on security matters without fear or favour,â said Atiku who was vice president between 1999 and 2007. âInvestment is a coward animal and is fearful of conflicts and insecurity. I will break the jinx in infrastructure financing.â

He decried the level of poverty and the disturbing rate of unemployment which he said were among the major factors fuelling insecurity in the land.

âThe Nigerian economy is crawling rather than growing. Per capita income, a measure of citizensâ well-being, has progressively fallen since 2015 because of declining output and a fast-growing population. Nigerians are worse off today than they were in 2015,â he said.

âThe oil and gas sector, which is the economyâs lifeline has suffered a decline in 19 out of 30 quarters since 2014. For many economic sectors and for ordinary citizens it still feels like a recession.

âUnder the present administration, our people are not working. More than 23 million people are out of jobs. In just five years between 2015 and 2020, the number of fully employed people dropped by 54%, from 68 million to 31 million people.â

Nigerian lady burns cheap wig her boyfriend bought for her