Bola Tinubu has accused Atiku Abubakar ofÂ lying about what transpired between them in the build-up to the 2007 presidential elections. 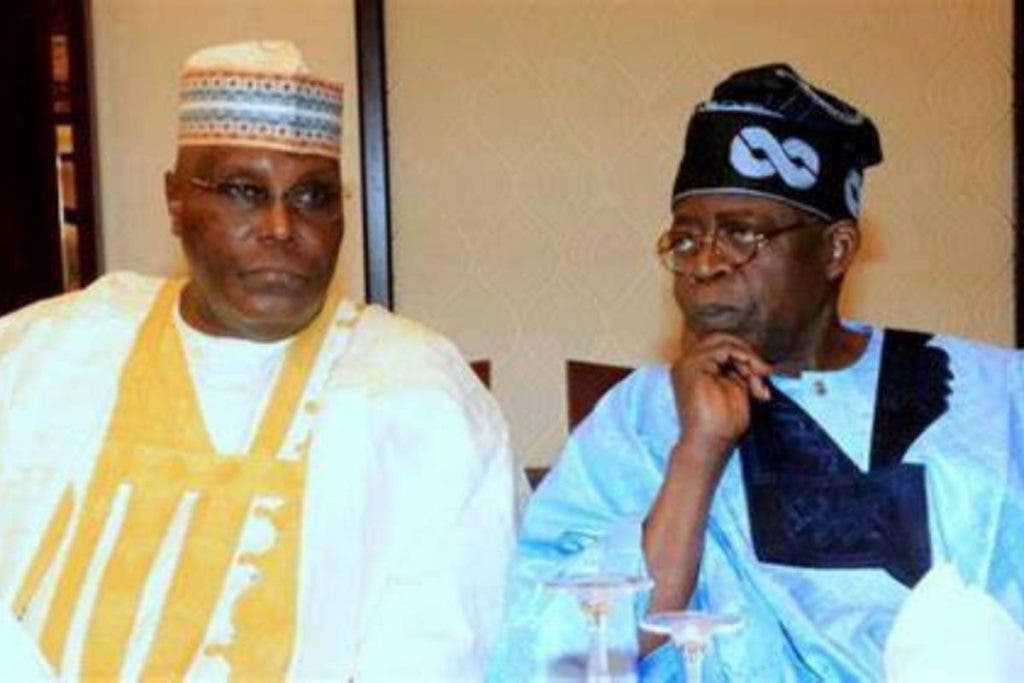 AtikuÂ had in an interview with Arise TV on Friday July 22, claimed that he rejected Tinubu as his running mate in 2007 because he is opposed to fielding a Muslim-Muslim ticket in the interest of the countryâs unity.

However reacting to thisÂ in a statement by his media aide Tunde Rahman on Saturday, July 23, TinubuÂ accused Abubakar of demeaning himself by pandering to base prejudice at a moment Nigeria needs true leadership.

The former Lagos state Governor said Atiku offered him the running mate position while aware of his faith at the time.

Atiku demeans himself, office he seeks by pandering to base prejudice at a moment Nigeria needs true leadership â Tinubu

In his desperate attempt to win the election by stoking religious bias, Atiku has reduced himself to uttering baseless lies on national television.

âWe are saddened to see such a man become unhinged from the truth. So obsessed is he with his quest for office, Atiku is willing to render any form of untruth if he thinks it might gain him a single vote. Atiku may want to be president. However, all he has shown is that he is pathological,â the APC presidential candidate said in a statement on Sunday by his Media Office signed by Mr. Tunde Rahman.

âWhatever moral compass he had has been lost. During a 22 July television interview, Atiku assaulted historic truth by lying that he did not name Tinubu as his running mate in 2007 on the Action Congress ticket because Atiku did not want a Muslim as his running mate.â

Responding to the false account of PDP Presidential candidate, Tinubu set the record straight. He recalled that Atiku was not among those who founded the Action Congress.

âIt was the actual founders of the AC who offered the partyâs flag to Atiku because of the need to fight the authoritarian designs then President Obasanjo and the PDP had on Nigeriaâs democracy.

âAt that moment, Atiku had been unceremoniously pushed aside if not out of the PDP by Obasanjo. We needed to rally all forces to confront the one-party state Obasanjo had in mind. Atiku was simply a beneficiary of this collective duty to fight the attack on multi-party democracy the PDP had launched.

âI feel sorry for dear old Atiku. Love of his own ambition has eclipsed his relationship with the truth and an honest account of the past. We formed the AC without his knowledge. When President Obasanjo virtually exiled him from the PDP, we lent him our support by giving him the AC platform for the 2007 election.

âLet me say openly that Atiku offered me the vice presidential ticket in 2007. Let me also say that my religion has not changed. When he offered the position to me, I was a Muslim and I believe he was aware of my religious faith at the time.
âAtikuâs calculations and deceit had nothing to do with religion or his sensitivity to it. His conduct has everything to do with what we discovered about his paucity of character and love of intrigue.

âWhen it comes to intrigue, we can say that Atiku is without bias. He will attempt to lie and deceive both Christian and Muslim with equal vigour.

âAtiku has no business raising the issue of a Muslim-Muslim ticket except as a hypocrite. Perhaps he believes people have forgotten his antics during the 1993 election. After he woefully lost his bid to be the presidential candidate of the Social Democratic Party, what did he do? He canvassed and lobbied harder than anyone to become the running mate to late Chief MKO Abiola. When it benefitted him personally, Atiku did not see anything wrong with Muslim-Muslim ticket. He saw everything right in such a ticket as long as he was on it.

âNow, Atiku criticizes my selection as running mate based on religion. He does so because he cannot criticize it on other grounds. If Atiku were to have one of his rare moments of honesty, he would admit that the person I selected as my running mate is more qualified for the position than the man who joined him. And this conclusion has nothing to do with religious faith. It has everything to do with competence, experience, ability, and vision.

âMy running mate and I are here to build a more just and prosperous society for all Nigerians, be they Christian, Muslim or adherents of other faiths. It seems that Atiku is here trying to build an edifice of lies and call that the house into which Nigerians should walk and reside. He will fail in this sad attempt to trick an entire nation.

âLet me restate my position on religion and politics. When I decided that Senator Shettima was the best selection as my running mate, I listened to and weighed in serious balance the advice received from a broad and representative array of wonderful Nigerians who deeply care about this nation and the path it must go.

âSome people counselled that I should select a Christian to garner support of the Christian community. Some said I should select a Muslim for a similar reason. I clearly could not do both. Both positions had merit and right on their side. But neither position expressed what was most right and needed for the moment in which we find ourselves and the nation.

âAll my life, the decisions regarding the team supporting me have always been guided by the principles of competence, innovation, compassion, integrity, fairness, and adherence to excellence. I was not going to depart from these principles at this important juncture. In fact, it was more important than ever before that I adhere to these principles.

âAs Governor of Lagos State, these principles helped me assemble one of the most capable governing cabinets any state or this nation has seen. I trust in these principles to allow them to, once more, guide me to construct another exemplary team that can do Nigeria proud.

âIn this crucial moment, where so much is at stake, we must prioritize leadership, competence, and the ability to work as a team over other considerations.

âThis is the standard I will use to select the rest of my campaign team and if you elect me as your president when I staff my government. I will select the best people for the right jobs so that we can construct a better Nigeria now and for generations yet to come.â