A Nigerian man simply known as Ayobami, has shared the shocking way he discovered that he and his friend were dating the same girl.

He said that he paid a visit to his friend who informed him that his girlfriend would be coming over to his place.

The friend appealed to him to talk to his girlfriend on his behalf because they were having issues. Interestingly, when the girl arrived, he discovered that his friendâs girlfriend is also his girlfriend.

In his words; âWent to visit my friend today, he said his woman is coming over, but he doesnât want to see her cause they are having issues.

So I should go and meet her and tell her heâs not around. Omo na my woman I see for gate ooo. I canât breeeeeeeet.â 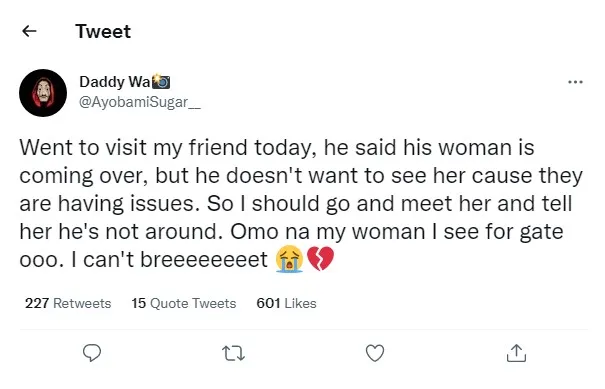