A 50-year-old schoolteacher, Adebisi Ayodele, has been arrested by the Oyo State Police Command for parading himself as an Assistant Superintendent of Police for over a decade. 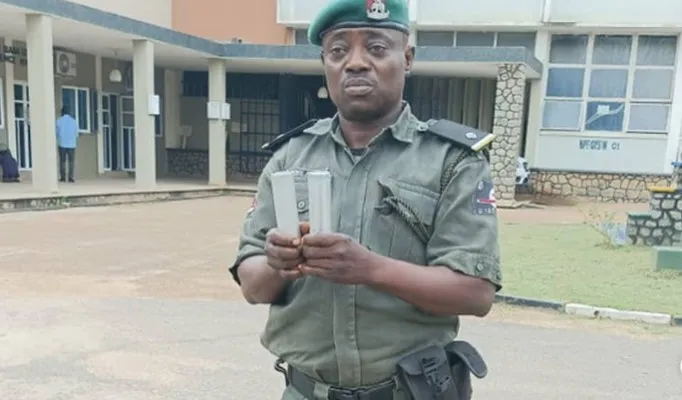 He is an elementary school teacher at Ikereku-Idan, Abeokuta, Ogun State who had hitherto dressed in police uniform and claimed to be an ASP for 13 years.

The fake officer reportedly confessed to stealing the uniform from his neighbourâs house in Abeokuta, Ogun state and noted that he loves police job.

The suspect at the time of arrest on Sunday 22/08/2022 at Asejire under Egbeda Local Government was providing illegal escort services in a Red Mitsubishi space wagon with Registration No. ARP 34 AA, dressed in complete police uniform in the company of another female passenger.

Exhibits found in possession of the suspected serial impersonator included two unexpended canisters? In his words, the suspect confessed to having stolen the police mobile uniform and kits from his neighbourâs house in Abeokuta.â

The suspect said; âI stole the uniform, the canisters and other kits from my neighbourâs house in Abeokuta, Iâm a primary school teacher, Iâm currently in level 14, and I love the police job, and have been telling people in my area that Iâm a policeman, so like five years ago I stole the uniform and kits and I started wearing it so that people will know truly that Iâm a policeman, I had not committed any offence with it before.â