The All Progressive Congress, APC Presidential Candidate, Bola Ahmed Tinubu has continued to defend the choice of Shettima as his running mate despite growing criticisms from different sections of the country. 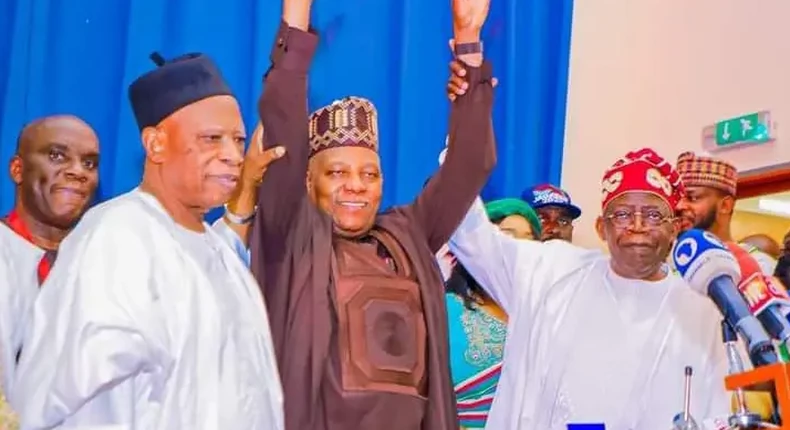 Asiwaju Bola Tinubu, has for the umpteenth time defended his decision to chose Senator Kashim Shettima as his running mate for the 2023 general election.

The former Lagos State Governor’s latest defence was in response to continued criticisms trailing his decision to field Shetimma, a fellow Muslim, his presidential ticket.

The Christian Association of Nigerian (CAN) and some prominent Nigerians have condemned Tinubu and APC for presenting a single faith ticket, arguing that such a move was insensitive in a multi-religious society like Nigeria.

Speaking during the ceremony organised to unveil Shettima in Abuja on Wednesday, July 20, 2022, Tinubu explained that his choice of the former Borno State Governor was informed by a set of principles he has adhered to throughout his life.

He also reiterated his commitment to work, alongside his vice, to change the fortune of the country “for the better.”

He said, âAll my life, my decision regarding the team around me and those I work with are guided by principles of competence, innovation, compassion, integrity, fairness and adherence to excellence.

âIn politics those principles are sacrosanct. They are not negotiable. Without them, there can be no victory or joy.”

This is as Tinubu, who is a former Lagos State governor, promised to work with his vice presidential candidate, alongside his team, to change the country for the better.

âAll my life, my decision regarding the team around me and those I work with are guided by principles of competence, innovation, compassion, integrity, fairness and adherence to excellence.

âIn politics those principles are sacrosanct. They are not negotiable. Without them, there can be no victory or joy,â the former Lagos governor said.

âThis is where politics must end and leadership must begin. True leadership is not grounded in religious pandering, populism or sentiment. To forge ahead as a nation toward development and prosperity, we must, instead, break the shackles of old thinking.

âThis chapter in our nationâs history demands a bold yet pragmatic approach. In selecting Senator Shettima I have committed myself to this path. I have made the hard choice because I believe it is the best choice.â

He added, âMuch has been said, written about my decision to select Shettima to partner me on this journey. As a committed and progressive leader, I have read and listened to all that has been written and said. It has been an emotional situation for me.

âOut of many competent Nigerians and out of many advice, I know it has to be my decision. And the hallmark of leadership is taking a decision at the right time when it ought to be taken.

âI did consult and I am proud to see all of you here acknowledging the quality of our Vice President Kashim Shettima.â